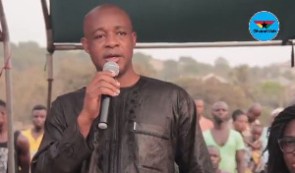 Adam Bonaa is a security analyst

A Security Analyst, Adam Bonaa says the Ejura Committee was not asked to investigate the cause of Kaaka’s death, therefore making their conclusion on the cause of his death unnecessary.

Macho Kaaka, also known as Ibrahim Muhammed was reportedly attacked by a mob on Saturday, June 26, 2021, at about 1:30 am and was heard screaming for help but by the time anyone came to the scene, he was already lying unconscious.

He was immediately rushed to the Ejura Sekyeredumase District Hospital and later referred to the Komfo Anokye Teaching Hospital, but he later died on Monday, June 28, 2021.

This was about the same time the deceased was actively involved in the FixTheCountry campaign.

His death got the youth angry and went on demonstration to demand justice for Kaaka with the perception that he was killed for being an activist of the FixTheCountry Campaign.

However, later reports suggested that Kaaka was allegedly killed by a family member, of which the issue was being investigated by the police.

While the youth took to the streets to demand justice for Kaaka, two people died following a clash between them and security personnel who had been detailed there to maintain law and order.

Four other residents who sustained gunshot wounds were also sent to the hospital for treatment.

A three-member committee was set up after President Nana Addo Dankwa Akufo-Addo gave the Interior Minister, Ambrose Dery, 10 days to provide a detailed report of the inquiry.

The Committee took testimonies from about 20 witnesses including journalists, police, and military officers, as well as political appointees in the jurisdiction of the incident, and family members of some victims.

It completed its work on July 9, 2021, after holding public hearings for two weeks.

Despite giving recommendations on how Government has to deal with the matter and the people involved, the Committee also stated that Kaaka’s death was not linked to the Activism but a family issue.

The report stated that, “We, accordingly find that, the death of “Kaaka” was not directly linked to his social media activism. It is more probably a family feud. This is also supported by the testimony of Aminu Mohammed, a resident of Ejura and a friend of the late “Kaaka”.

Speaking with Ekourba Gyasi Simpremu on Atinka Tv’s morning show, Ghana Nie, Adam Bonaa said, “They strayed into an area which is not their area. The police made us understand that Kaaka did not die a natural death and so it must be investigated.

“And so if the issue is still under investigation you don’t begin to make hasty conclusions. It was a conclusion that was completely unnecessary.”

The Security Analyst again said the issue should have been left for the police to handle and instead of doing something that will further bring division between the family.